As a white girl from a very small town in New Hampshire, I’m hardly an expert on the history and accomplishments of black women. Nevertheless, I ended up giving a presentation on this very topic to a group of sixth and seventh grade girls on Monday.

I recently started volunteering with Girl Up, a United Nations Foundation national campaign for girls. The organization, which “engages girls to take action,” has numerous chapters and clubs around the country, including one at a middle school in my city.

After last week’s meeting, the girls, their teacher, and I decided the club should do something to celebrate Black History Month, which happens every February, but with a focus on black women. One aspect of Girl Up is education, so I offered to make a slideshow which the girls could then make posters from to hang around the school.

Sitting down this weekend to make the slideshow, I quickly realized how daunting the task was. Do you know how many influential black women there have been throughout history?? Answer: A LOT. Also, the teacher said to find women who may not be as well known (i.e. they all know who Rosa Parks is).

I was able to think of some women on my own, but after doing a quick Google search, I realized I was missing some very important women. In the end I made a presentation with 13 slides, including an opening page, a “women you may already know” page, and a “black women today” page, which featured a collage of Lupita Nyong’o, Serena Williams, Shonda Rhimes, the women who started Black Lives Matter, and more.

For the women featured on the other 10 slides, I wanted to include a good mix of accomplishments and time periods. I included lots of firsts:

I also had slides for journalist and early Civil Rights leader Ida B. Wells, and feminist activists bell hooks and Audre Lorde.

Looking more towards present day, I put Chimamanda Ngozi Adichie in the presentation because aside from being an amazing author, she also has great ideas and gives the best lectures. Everyone should listen to her TEDx talk “We Should All Be Feminists.” Here’s the link. Click it and be transformed. If you’d like a shorter version, part of the speech is sampled in Beyonce’s “Flawless.”

I also included someone a little closer to the girls’ age: actress, activist, and my personal hero, Amandla Stenberg. Every girl in the club knew she played Rue in The Hunger Games, but that was it. I enjoyed talking with them about her views on cultural appropriation, and how she’s inspiring a new generation of feminists. I think she’s incredibly inspiring and I hope she can be a role model for the young girls in the club. 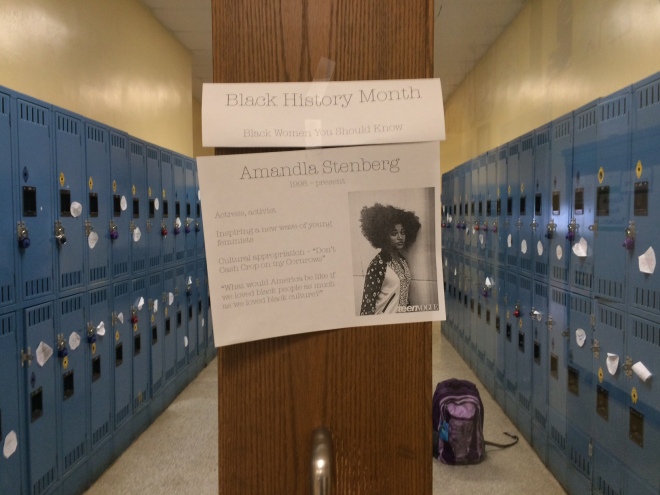 I know the younger and newer people on the list haven’t contributed as much yet and don’t have a lot of historical significance, but I think it was important to include them. It shows the girls in the club that it doesn’t matter how old you are and that anyone can make a difference and affect change.

Creating this slideshow didn’t only educate the girls in the club, it really taught me a lot as well. I didn’t know many of the women, or I only knew their name. Doing this was very enlightening and interesting. It makes me wonder why this isn’t taught in school. These women are so important, and yet so overlooked (at least by the majority of white people).

The posters are now hanging in the schools and all the students will (hopefully) learn about these women. To engage the other students further, we decided to hold a trivia contest with prizes each day. Even if the posters go unnoticed, I’d like to think I made an impact somehow… on the girls in the club, and definitely on myself.

I obviously couldn’t put everyone in the slideshow, but if you think there’s another woman who should have been included, let me know in the comment section!