I think there’s a pretty strong general consensus that this summer went by waaaaaaaaaayy too fast. It’s already September, and with Labor Day weekend behind us, fall is officially here. With that being the case, I thought I’d share what I read this summer, especially since I haven’t posted since May. Oops.

I always romanticize summer reading as some luxurious activity characterized by lounging by the water with a juicy read. Reading in the sunshine always makes me feel like I’m on vacation, even if I’m just sitting outside of my apartment. This summer my books didn’t travel far, but with stories set in New York City, Italy, and even Hogwarts, I ended up on some interesting adventures. 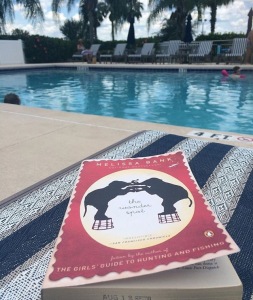 I think I found this book at a library book sale, and was drawn to it because of the author. You may have heard of Bank’s The Girls’ Guide to Hunting and Fishing (not an actual guide, FYI), which I read a couple of years ago and enjoyed. Like the aforementioned novel, The Wonder Spot had a loosely structured plot and centers around a girl as she navigates growing up and becoming an adult. Sophie Applebaum, a Jewish girl living in New York, is like any twenty-something trying to find her place in the world and figure out who she is as a person. Overall I enjoyed this, but the ending left things slightly unresolved.

Favorite line: “It didn’t seem wrong to want more, but it was wrong to expect it to be delivered.” Basically sums up the millennial mentality. 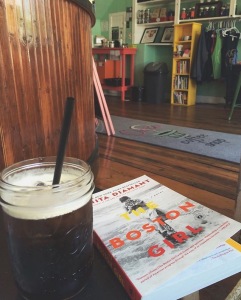 The Boston Girl was what I’ll call a random book purchase. I don’t often buy a book, especially one at full price, unless I’ve heard of it or of the author. I’ll be honest: I bought this because I liked the cover. And let me tell you, judging a book by its cover worked out in my favor. I really enjoyed this book and was crying as I finished it. The book is about a woman named Addie Baum, and is structured as if she’s telling her life story to her granddaughter. Similar to The Wonder Spot, The Boston Girl follows Addie’s life in Boston from childhood through adulthood and into old age. What I liked most about the book was the journey Addie went through as she worked through the challenges of being a poor girl in an immigrant family and then striking out on her own. She was focused on her independence and doing what was right for her instead of doing what her family, and society, expected of her.

Favorite line: Too many! I didn’t write any down because I would have ended up just copying down the whole book. 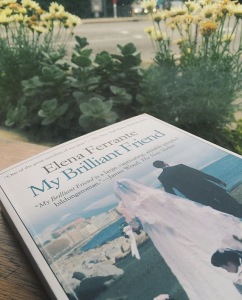 My Brilliant Friend is the first book in a series called The Neapolitan Novels, which were translated from Italian a few years ago. Shut out to my Uncle Rich for recommending these books to me, because so far they’ve become some of my favorites. The series follows the lives of Elena and Lila, two girls growing up in Naples, and My Brilliant Friend focuses on their childhood and early adolescence. A major theme of the book, and the series, is the power of female friendship and My Brilliant Friend sets the foundation of Elena and Lila’s. The relationship is complex, and throughout its ebbs and flows, the two girls are always bound to each other. One thing that struck me about the book is how Elena tries to find herself and learn about who she is when she has spent her whole life comparing herself to Lila. Her identity is so closely tied to their friendship, making it an interesting journey of self-discovery.  I feel that the two girls know each other better than they know themselves, even if they don’t always realize it. Additionally, Ferrante’s writing and the level of detail she puts into every sentence is remarkable.

Favorite line: “I did many things in my life without conviction; I always felt slightly detached from my own actions.” Not only does this line capture much of Elena’s inner struggle, but it’s something I can relate to as well. 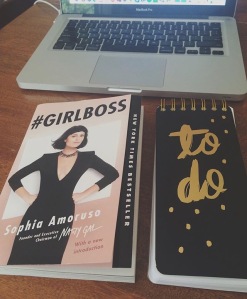 So, #GIRLBOSS is a book I’ve been meaning to buy for a long time and I’m so glad I finally did. First off, for those who don’t know, a girl boss is a woman who is ambitious, knows what she wants, and is willing to work beyond hard for it. Sophia Amoruso knows How. To. Get. Stuff. Done. She’s not messing around, and in her book she explains exactly how she went from a poor twenty-two-year-old college drop out to the CEO of her own multi-million dollar fashion company all before she turned thirty. Her story is insane, and also super inspiring. I want to write books and have articles published in national publications and #GIRLBOSS has made me realize how possible those things are if I’m willing to work for them.

Favorite line: “Life is short. Don’t be lazy.” A+ advice.

The Story of a New Name | Elena Ferrante 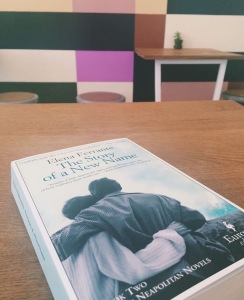 After reading My Brilliant Friend, I thought The Neapolitan Novels couldn’t get any better. Then I read the second book in the series. The Story of a New Name completely engrossed me and pulled me even deeper into Elena and Lila’s world. This book tests their friendship even more so than the first book and illustrates just how much their relationship can endure. The way in which Ferrante captures the complexity and depth of their friendship is astounding. Also, the two girls have grown up and are now in their late teens and by the end of the book, in their early twenties. Their problems, both as individuals and as friends, have grown. Lila is struggling to survive a life that isn’t one she planned on living, and Elena is trying to break free from the world that has held her family and peers back. Class is a strong theme in the book, as are societal expectations and the power of education. Both girls’ thoughts, struggles, and ideas all come back to these themes as they develop their friendship, and their own identities.

Favorite line: “I wasn’t capable of entrusting myself to true feelings. I didn’t know how to be drawn beyond the limits.” Like my favorite quote from  My Brilliant Friend, I think this shows Elena’s continuous struggle to know who she is as an individual, and again, I find it relatable. 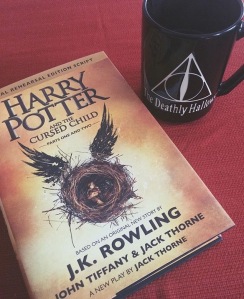 If you know me, you know how much of a Harry Potter fan I am. I once visited the Harry Potter movie set and cried so hard I thought I might pass out. So, it may come as some surprise that I wasn’t super excited about this new book. For those not in the know (aka anyone living under a rock), The Cursed Child is a play set in the present day focusing on Harry’s son, Albus, and the book is simply the script. I wasn’t jumping out of my seat for this because while I love all things Harry Potter, I wish J.K. Rowling would just let it be. You don’t fix what’s not broken. Not to give away any spoilers, but the new story can change the way you might view some of the original books, which I don’t like. Also, because it’s a script, the story was lacking detail and didn’t feel as filled out. Overall, I liked the book and I accept it for what it is. I wasn’t expecting greatness.

Favorite line: Nothing really jumped out at me, but if I did have a favorite line, it’d probably be something Ron said.

I’m currently reading The Girls by Emma Cline, which is SO good, and after that I’ll be reading the last two books in The Neapolitan Novels series. I miss Elena and Lila and need to know what happens next! Also, while summer reading is great, nothing beats bundling up and reading under a giant tree surrounded by fallen foliage while breathing in crisp fall air. I can’t wait!

View all posts by Kate Gardner