I recently did something I haven’t done in a few years… I bought a copy of Teen Vogue. It’s not that I don’t like the magazine (I follow it on every social media platform), but I thought I had outgrown it. When I saw Amandla Stenberg on the cover, though, I jumped on it.

Not only is the feature story in the February issue about Amandla, who is known for her video on cultural appropriation “Don’t Cash Crop My Cornrows” and for playing Rue in The Hunger Games, the whole edition is about feminism. I haven’t seen another mainstream women’s or girls’ magazine do this. Ever. Correct me if I’m wrong. 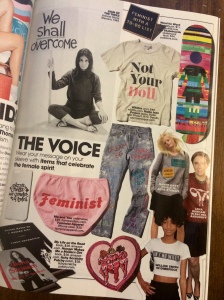 using art to express feminism and activism, how girls sometimes hold back so they won’t offend others, clothes with feminist sayings and messages, makeup and hair ideas for girls of color, and a photo spread of “androgynous beauty.” And in addition to Amandla’s cover story, which was written by Solange Knowles, there is 10-page spread featuring “the faces of young feminism.”

Teen Vogue’s website has also been featuring many inclusive stories lately. And in honor of Black History Month, the magazine worked with Amandla to create a Black Girl Magic video series. All of the videos, which I highly recommend watching, can be found here.

If magazines put out these kinds of issues when I was a teenager, I may have discovered feminism much sooner. I understand though that the media (and people in general) weren’t talking about feminism very much even a few years ago. Now it’s at the forefront of many discussions. Everyday I see young girls in real life and online talking with passion about feminism and gender equality, and while I’m jealous that I didn’t know about these issues at a younger age, I’m glad that the next generation does. 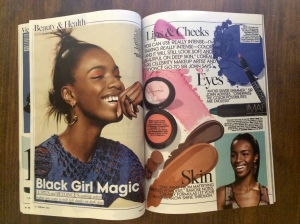 I think it’s so important for magazines like this to talk about feminism, and to talk about intersectional feminism. Representation matters, and it’s rare that magazines will offer much beauty advice for people of color, especially people who have very dark skin. When I look through a magazine, most of the people look like me (aside from the fact that they’re models), but I realize this isn’t the case for all girls. Growing up though, I didn’t realize that other girls felt underrepresented, so I’m glad that this won’t be the norm as much anymore (hopefully). Even Barbie is trying to be more diverse by creating dolls of different races and with various body types and sizes.

I also think having stories about feminism in magazines is important because it gets girls thinking and talking about important issues. If a girl picked up this copy of Teen Vogue and was inspired by something she read or decided to talk about an issue with a friend or her mom, that would be the coolest thing.

These are the kinds of stories I want to work on. I want it to be normal to see girls that look like Amandla Stenberg on a magazine cover. I want to inspire young girls to be themselves and to fight for what they believe in. I want to help all young people understand feminism and embrace it.

View all posts by Kate Gardner